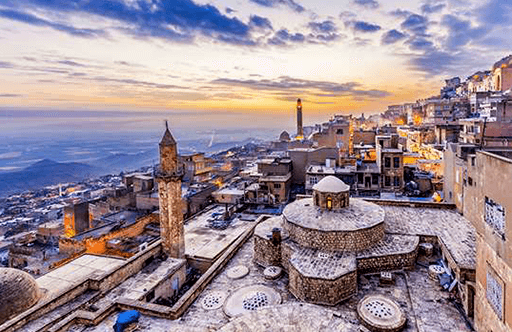 A Day in Mardin

Resembling a giant open air museum, Mardin is a city you will want to see more than once. We can say that renting a car is the best option to visit this city, which maintains the traces of the civilizations it hosts. We are sure that the suggestions we receive from the locals of the city will make your day unforgettable. What to eat in Mardin? Which restaurants should we choose? Among the historical places of Mardin, where should we give priority? After completing your car rental process in Mardin, you can shape your day with our article which answers these questions you are curious about to plan your trip.

Before you start exploring Mardin, we recommend you to have a nice breakfast. The famous Mardin donut kiliçe and sembusek, which can be defined as sealed pita, are some of the foods that can accompany your breakfast in Mardin. There are also venues in the city where you can experience Syriac flavors. In addition, you can choose among many breakfast places with a unique view if you want to see the view before exploring the city, and after breakfast you can drink your Turkish coffee by the breathtaking view of the Mesopotamian Plain. 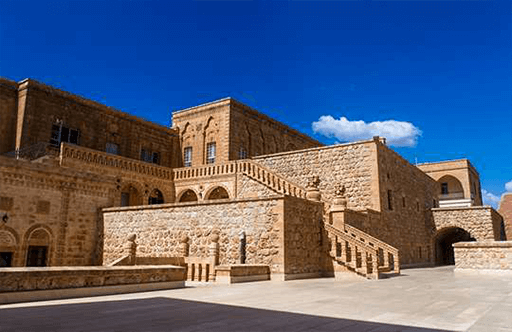 Midyat should be the first stop of your day in Mardin. According to the locals of Mardin, the way to get to know their city better passes through Midyat. The region, 124 km away from the city center, is considered the heart of the Turabdin Plateau, which is considered the homeland of the Assyrians. The best place to explore Midyat, where you will meet the mysterious side of the East, is undoubtedly Mor Gabriel Monastery. The monastery, which was built in the 4th century and is the oldest standing temple of Assyrians, is a breathtaking unique building thanks to its architecture.

From Mor Gabriel, you can go to Gelüşke Han, 1.5 km away, and then to Izbırak Village, one of the most interesting spots of the region. The village, which is about 10 km away from Midyat, is a place where the Mediterranean climate prevails unlike Mardin. Built in the 5th century, Mor Dimet Church is known as the most valuable building here. 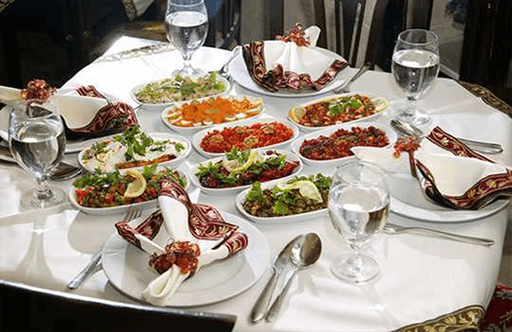 When you get this close to the Assyrian culture and history, it can be an interesting experience to get to know the flavors of its cuisine. You can choose between lunch suggestions such as bulgur-u basro, sembusek or lamb arm. If you are looking for different alternatives, we recommend you to try the kişk soup, alluciye, eggplant pilaf with cinnamon and mahaleb and cauldron kebab. 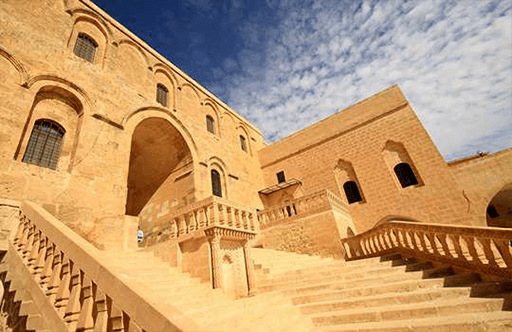 The Mor Behnam Kırklar Church, built by the Syriacs in the 6th century for Mor Behnam and his sister Saro, is one of the most special buildings in Mardin. The building, which is one of the rare examples of stonework, is embroided like a lace. You should definitely spare time for the church, which is about 70 km from Midyat.
You should not return to the center of Mardin without seeing Deyrülzafaran Monastery, which is about 8 km away from Mor Behnam. The monastery, which is one of the most recognizable structures in Upper Mesopotamia, is considered the religious center of the Syriac community.

You can also add Hatuniye Madrasah, which is about 3 km away from Deyrülzafaran, to your travel list.  The madrasah, which was built in the 12th century, where the footprint of Prophet Muhammad is exhibited, can be your last stop before heading to the center of Mardin.

Mardin Museum comes first among the suggestions of local people for your tour in the city center. The museum's collection which focuses on the history of the city, serving in the building, which was an old Assyrian patriarchate, is remarkable. Kasımiye and Zinciriye madrasahs are also worth seeing. Locals of Mardin also recommend that you wander around the historical streets of the city and see the old houses closely. 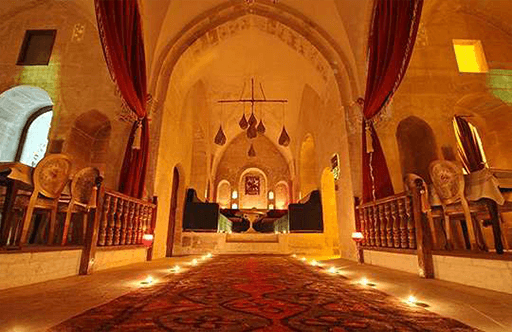 You can choose one of the many places where you can meet Mardin cuisine in a pleasant atmosphere. For dinner, you can choose a place with a view accompanied by city lights. İçli köfte, kibe and dobo are just a few of the flavors you can choose for dinner.

If you want to continue the night, there are different options in Mardin. If you are a folk music lover and want to spend an authentic night accompanied by Mardin folk songs, there are venues you can prefer. If you wish, you can choose the cafés and bars in the popular streets of the city for a quieter end.

Renting a car from the Avis Mardin office will be a step that will make it easier for you to explore the city. You can make your booking for renting a car in Mardin by phone or via our website.